The nuclear dangers facing the United States, its allies, and the world are increasing.

Three years after entering office, the Trump administration lacks a coherent set of goals, a strategy to achieve them, or the personnel or effective policy process to address the most complex set of nuclear risks in U.S. history. Put simply, the current U.S. administration is blundering toward nuclear chaos with potentially disastrous consequences.

In May 2020, the American Nuclear Policy Initiative (ANPI), a task force of former government and non-governmental experts, released an objective analysis of U.S. nuclear policy under Donald Trump. “Blundering Toward Nuclear Chaos: The Trump Administration after Three Years” finds that all of the nuclear challenges facing the United States – some inherited by the president and others of his own creation – have worsened over the last three years, putting national and global security at greater risk of nuclear use.

Featuring seven essays from ANPI members, the report details the current administration’s efforts on the issues of nuclear proliferation, strategic stability, nuclear modernization, Iran, and North Korea. The papers are by some of the most experienced and insightful U.S. analysts of nuclear issues.

“This group of nuclear and security experts is expressing collective concern about where we are and where we are headed, with the hope that those leaders responsible for our security, now and in the future, will take notice and think about how to change course before it is too late.”

Over the next year, Global Zero’s ANPI will work to develop a set of effective solutions to the growing nuclear dangers the United States, and the world, face – along with a plan for implementation – for a future administration (of either party) that seeks to repair the considerable damage done to the effort to prevent the spread and use of nuclear weapons over the past three years. The goal of U.S. policy should be to restore America’s leadership on nuclear restraint, nonproliferation, and disarmament.

The American Nuclear Policy Initiative is an independent project of Global Zero. It is made possible by the generous support of the John D. and Catherine T. MacArthur Foundation. Additional funding was provided by the Carnegie Corporation of New York. 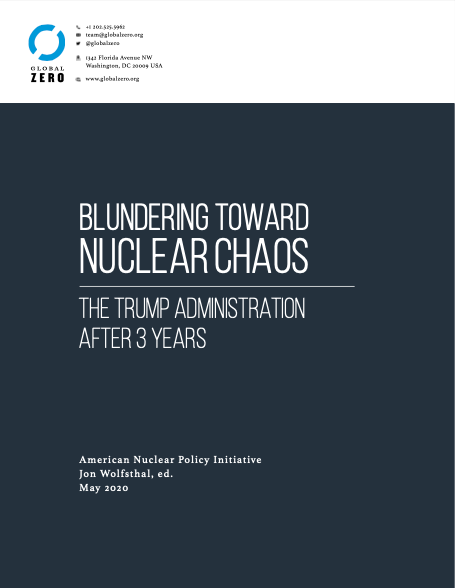 The Trump Administration after Three Years

Nuclear dangers facing the United States are getting worse, both through neglect and through specific policy choices made by the Trump administration. Detailing the administration’s efforts on nuclear proliferation, strategic stability, nuclear modernization, Iran, and North Korea, the authors provide an objective summary of nuclear policy under the current administration and its record on protecting the United States and its allies against perhaps the greatest national security danger facing humanity.