When it comes to nuclear weapons, the U.S. has not yet shaken the technological and strategic legacy of the Cold War. Across the Great Plains, hundreds of intercontinental ballistic missiles wait ready to be launched at a moment’s notice. Once launched, they cannot be recalled.

At the same time, it’s clearer than ever that nuclear-armed states are long overdue for a serious reconsideration of their spending priorities. The COVID-19 pandemic has exposed the profound vulnerabilities of current approaches to security. In the U.S., nearly a century spent prioritizing endless competition for military supremacy over the basic building blocks of a dignified life for its citizens — high-quality healthcare, education, housing, and basic infrastructure designed to mitigate and withstand the worsening effects of a changing climate — has yielded a profound insecurity, a society constantly on the brink of self-destruction.

Global Zero’s groundbreaking report, The Real Cost of ICBMs: U.S. Economic Development Beyond Defense Spending, charts a course toward a stable future for the five U.S. states where ICBMs are based beyond reliance on defense spending.

The report takes stock of the economic impact of U.S. land-based nuclear missiles, turning a critical eye on defense industry talking points that cast it as a uniquely effective job creator. Building off of research that shows healthcare, education, infrastructure, and non-fossil fuel energy all create more jobs than defense given comparable levels of federal investment, it outlines three possible paths for replacing the economic impact of ICBMs:

This report provides practicable pathways for the U.S. to move away from dangerous, destabilizing weapons toward an alternative vision for security — one predicated on no-first-use policies, elimination of unnecessary weapons, such as ICBMs, and sustainable economic prosperity for local communities. For a comprehensive vision for U.S. nuclear policy, check out Global Zero’s Alternative Nuclear Posture Review.

Short on time? Check out our Real Costs of ICBMs explainer here. 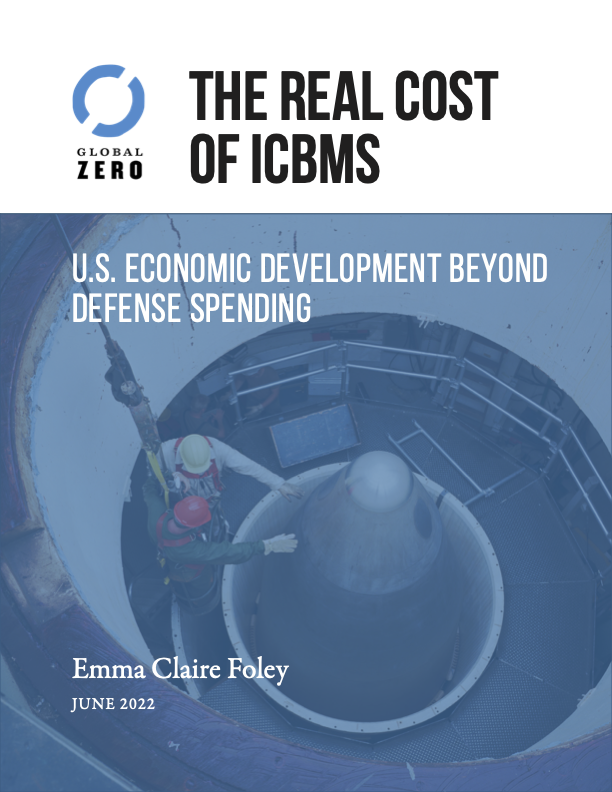 The United States can chart a bold course toward reinvestment of excessive defense spending into real, long-term prosperity for the communities living in the shadow of U.S. land-based nuclear weapons. Research has shown that public investment in housing, healthcare, education, and infrastructure creates more jobs than similar investment in defense. By moving away from investing in building new and maintaining ICBMs, the United States can flip the script and create real security for everyone.